As an author of a mere half of a book, I feel greatly honoured to have been invited by the enterprising Tiffani Burnett-Velez to participate in her Historical Novel Blog Tour, mingling with such illustrious writers as Meara Platt, Douglas Hawkins, A. David Singh, Claudia Long, Greg Michaels, Barbara Eppich Struna, Eleanor Parker Sapia. Thanks for the privilege.

Who you are, where you’re from, your writing credits

I wrote this bit under palms in the Brazilian jungle, sipping a freshly-made caipirinha. All nine family members – including two charming grandchildren – were visiting our daughter-in-law’s relatives for Christmas.

Born in (old) Jersey GB, my father was Swiss, my mother of French Huguenot stock. I studied physics in London and met my Finnish wife in Geneva during a research project at CERN. After many moves, we have settled in a beautiful village near Zürich, Switzerland. I’m now facing the prospect of retirement.

I’m known as a friend of nature, loving to ramble in the beautiful Swiss mountains, body surf in the breakers or spend hours watching ants and beetles.

My professional career was mostly in IT, but for the last ten years I’ve worked as a technical writer. So I know how to use Microsoft Word and how to build grammatically correct sentences. But I had absolutely no experience of writing fiction.

What is your latest historical fiction piece?

I wasn’t looking for a story. The story found me – and begged to be written! It’s about young Silvanus growing up on the Isle of Elba in the sixth century, and – like most teenagers – struggling with life’s challenges. He happens to meet the old, exiled Bishop Cerbonius, who lives an austere life in a cave. Their friendship proves to be the key to Silvanus finding his true goal in life.

But: Could I write such a story? Could I muster the fantasy to bring the characters to life? Were the skills to compose captivating prose slumbering somewhere in my breast? Did I know anything about the history of Elba?

In each case the answer seemed to be a resounding NO!

So I started. I’m writing Aquila under the pseudonym Vince Rockston.

Why did you choose to write it?

My wife and I greatly enjoyed a trekking tour on the Isle of Elba a couple of years ago. It was our first time there and, as usual in any new place, I looked for a historical novel which was set on the island and written in a language I could understand (not Italian!) I really wanted to read about the place and it’s people.

Some weeks after returning home, a story sprang to mind and shouted, “Why don’t you write me?”

A particular incident had caught my attention on one of the last days, as we trudged, weary, down from the highest peak of the island, Monte Capanne. “If anyone is interested, just up there is a cave where San Cerbone lived,” our guide informed us. Most weren’t. But I and one other participant made the effort.

The cave was tiny. Why on earth would a Bishop come and live here? And when was that? Our guide couldn’t say. Mr. Google came to the rescue: late sixth century.

What about that era appeals to you?

Who knows anything about sixth century Italy? Not I. Those were the Dark Ages, weren’t they? When nothing happened.

But I was always one for a challenge.

What little contemporary documentation one finds (e.g. the Variae of Cassiodorus or Procopius‘ Wars of Justinian and Secret History) tend to be about the rulers of the times, the rich and powerful. I am more interested in discovering how ordinary people lived, what they ate, what problems they faced, e.g. pirates, famine, war, religious disputes, disease. And then to reflect on their probable hopes, dreams and fears.

Are your characters real or fictional? If they’re real, how did you fictionalize them?

Cerbonius – or San Cerbone – is a historic character. So are Pope Vigilius, the Gothic King Totila, General Belisarius, and a couple of others mentioned in passing.

I’ve gone into some detail about the life of Cerbonius here, pointing out what historical evidence we have – some of which is contradictory – and where I have padded out his character and life story.

What kind of research is involved in writing your novel?

It’s really a question of trying to plant myself into that setting – geographically, culturally, climate-wise, etc. I went back for a week of research, tracing as far as possible Silvanus‘ footsteps, visiting historic sites and museums, and trying hard to take contact with the people I’d heard knew most about the history of Elba.

I stayed a couple of nights in Angelo Mazzei’s Bed & Breakfast In Poggio. He’s something of a musician and artist, speaks several languages and has a wealth of knowledge about the area and it’s history.

He arranged for me to visit the tiny but very fascinating local museum – Casalino del Castagno – which has many artefacts from the Etruscan and Roman periods. 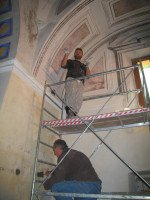 It was also a great joy to meet up with Paolo Ferruzzi and his son Silvestre, who were renovating the chapel Madonna del Monte above Marciana Alta. I had tried to reach them in advance, as I knew they had written books on the history of Elba and conducted archaeological research. But languge had been an obstacle. In the end, they invited me to a spaghetti lunch cooked by Dad in Napoleon’s erstwhile lodgings! And we managed to communicate in French and through sketches.

Silvestre even granted me a private viewing of his diligently assembled and immaculately arranged Archaeological Museum in Marciana!

Apart from that, I’ve made use of the following:

How do you organize the fictional aspects of your writing vs. the historical facts?

Silvanus’ personality and life experiences are entirely the product of my imagination. I picture myself in his shoes – damming rivers and studying wild animals, struggling to survive in harsh conditions, wondering about the big wide world, sorting out his religious beliefs, practising the family traditions, bartering at the market and succumbing to temptations. As the book develops, I feel I’ve got to know him quite well. I’m sometimes surprised at what he and his friends get up to and how they cope.

As regards San Cerbone, we don’t have a whole lot of factual detail. So I use my fantasy to fill things in. What was his life like as a young man? Why did he flee to Elba? How does he spend his time in later life?

How does the historical timeline move your plot along or influence the actions of your characters?

War between invading tribes from the north and the Byzantine ‘Romans’ – and the resulting destruction and deprivation – were dominant forces at the time. I made myself a timeline, including certain historic dates, and try to fit my story in with as little deviation as possible.

How do you feel about writers taking creative license with historical facts? Or, does it bother you when facts are changed to fit the story in a movie or a book?

For me, the characters and their lifestyle must ring true to the period. Where historic events or persons and mentioned, I’m always tempted to look them up in Wikipedia and find out more. If I discover the author has twisted the facts beyond recognition, that annoys me.

But a certain amount of poetic licence is required in any work of fiction. That’s OK.

What’s next for you after this present work?

This present work still has a long way to go. I’ve only just got past the midpoint of my story, although I have a pretty good idea where it’s going. From now on, it mainly concerns the protagonist’s inner character arc – his thoughts and dreams and questions and goals – rather than events and activities. It’s challenging.

So I keep plodding on, digesting feedback from critique partners and critiquing their work in turn. Revision. Add some color. Cut out superfluous bits. Improve the various voices. Polish the dialogue.

Next? Unless one’s name is Umberto Eco, they say one’s first book never gets very far. But I really have no plans yet for any further writing. I’ll try to finish Aquila and then see if I have courage and energy for a sequel. Or perhaps a totally different challenge.

I’m pleased to be able to introduce our next blogger in the tour.

Dianne Ascroft is an urban Canadian who has settled in rural Northern Ireland with her husband and an assortment of strong-willed animals. She writes contemporary and historical fiction with an Irish connection.

She has released a novel, Hitler and Mars Bars, and a short story collection, Dancing Shadows, Tramping Hooves. Her articles and stories have been printed in Irish and Canadian magazines and newspapers as well as in anthologies by Writers Abroad, Fermanagh Writers and Fermanagh Authors’ Association.

Online she lurks at www.dianneascroft.wordpress.com. Be sure to take a look.

Every author stresses how important revision is. The trouble is, one easily overlooks one’s own weak points, omissions and errors. The solution sounds easy: Get a good Critique Partner for reciprocal manuscript correction. But how? There aren’t that many budding English-speaking authors in Oberlunkhofen! Please leave this field emptyFirst name Email * Check your inbox…

I’ve come to a point in my story where Silvanus engages in heart-searching exchanges with his wise old mentor, Cerbonius. They don’t do much. They talk. This, I realize, can quickly become boring for the reader, who is hoping for more excitement. What’s the solution? Please leave this field emptyFirst name Email * Check your inbox…

I doubt that Silvanus saw many motor boats from his hillside home on Elba. But he certainly watched the birds and shipping. And dreamed of adventure in the big, wide world. Please leave this field emptyFirst name Email * Check your inbox or spam folder to confirm your subscription.

Among many interesting bits and bites, the December 2012 issue of The Woolf plugged the personal writing editor and coach Pro Writing Aid. Perhaps you all know and use it already. I tried out the free online version and very soon subscribed to the premium edition, which, among other things, builds the proofing features right into such applications as Microsoft Word, Google Chrome…